The mission of the Connecticut Judicial Branch is to serve the interests of justice and the public by resolving matters brought before it in a fair, timely, efficient and open manner. 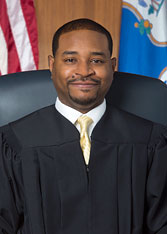 Justice Mullins received his Bachelor of Arts degree in Sociology from Clark University in Worcester, Massachusetts in 2001 and his Juris Doctor from Northeastern University School of Law in 2004. Justice Mullins is admitted to the Bar of the United States Supreme Court as well as the Connecticut Bar.

Prior to his appointment to the bench, Justice Mullins was an Assistant State’s Attorney for the Appellate Bureau, Division of Criminal Justice, in Rocky Hill, and an Assistant Attorney General in the Child Protection Division in Hartford. He worked as a law clerk for the Honorable Frederick L. Brown of the Massachusetts Appeals Court from 2004 to 2005.